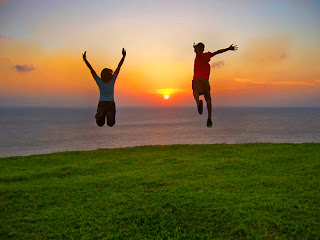 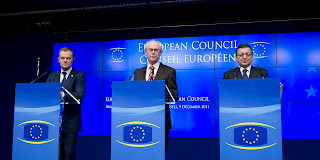 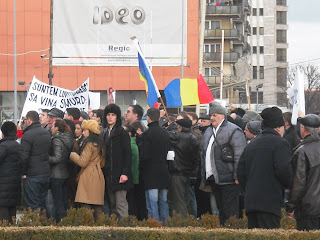 Thousands of Romanians demonstrated today in the largest cities of the country. The biggest protest was organized in Romania's capital of Bucharest, where the civilians clashed with the police officers.

Several people were injured as a result of the violent turnoff. The protests in Bucharest began at mid-day and continued until late in the evening. The civilians set on fire some of the main streets of Bucharest, destroyed the fences, flung stones and bricks and clashed with the police officers. One of the protesters was burning.

The people demand the resignation of president Traian Basescu who has previously approved a new health care regulation. He has given up lately his decision but the demonstrations didn’t end. The people will continue their rally tomorrow. 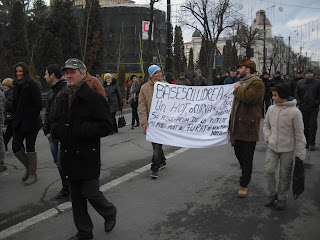 In Iasi, the second largest city of Romania, hundreds of people rallied in front of the prefecture. Here the demonstrations were peaceful and carefully monitored by the police officers. The people chanted messages such as “Down with the government!” “Traian Basescu – resign!” and others. Some of the protesters are members of political parties which are in opposition.
at 9:10 PM No comments:

Interships Have Become a Popular Way to Find the Dream Job Many multinational companies and "think tanks" are now offering internships within their institutions. It is a perfect way for the students to gain experience while still attending the university. They can mix the theoretical knowledge with the practical approach in a comprehensive manner. An internship can be from a couple of weeks to a couple of months, though the time is determined on both the company and the student's abilities to please their potential employer.

These internships can be paid or unpaid. Frankly, most of the companies prefer to tell the students that they’re not going to pay a dime for the work they do. It’s a way of cutting costs, lessening the employees’ responsibilities and taking full advantage of an unpaid human resource in a perfectly legal manner. This is a win-win situation only if the intern actually learns something through training, workshops and practical work the business gives them to do. Unfortunately, many students are improperly used and waste their time and resources while doing nothing more than photocopying papers and making coffee.

The length of the internship should be approached to the needs of the applicant and the field he/she works in. It’s illogical to spend only a couple of days in a department, because one cannot fully understand the tasks the bureau has to deal with in such a short amount of time. Some colleges don’t quite grasp the concept that it takes a typical student more than a few days to thoroughly learn what is expected of them. The universities often require their students at the end of the year to do only a two-week internship. Sometimes it is even difficult to find a company to do your internship. The competition is quite high considering the fact that the unemployment rate is growing from year-to-year in most of the countries of the world. Most students are hoping to be hired after doing the internship, being the only solution to find a job during an economic crisis. The success of each applicant depends on how skillful he/she is, what theoretical background they may or may not have and what previous experience they possess.

So I ask you... Are the internships programs the ideal way for grabbing a well-paid job during a recession period? 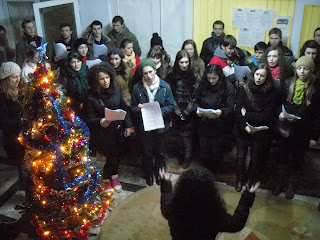 Christmas is the holiday of our hearts

Christmas is almost here. It’s one of the most beautiful holidays of the year in Romania and Moldova. All the members of the family get together, sing carols and have meals together. It is also a religious moment and many people attend the church service.
Being in a period of winter holidays, I will let you listen to two Romanian carols – symbols of the Romanian culture and treasure. Enjoy!
at 11:32 PM 1 comment:

Struggling with the Economic Crisis, the Moldovans Give Up Their Homeland

Igor Stropsa, 30, works as a builder. He is pleased with his job; working eight hours a day and receiving a steady income. But he had to leave his country to find this job. He has worked in Rome, Italy since 2008. 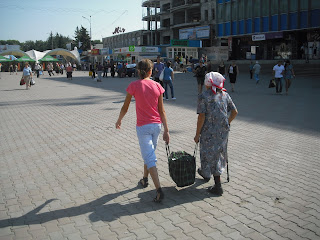 “I decided to leave Moldova because I didn’t have a job. I also wanted to have a beautiful future as others do,” says Stropsa. Despite his satisfaction to have a full-time job, not everything is perfect. “I miss my parents, my nephews and my motherland,” says wistful Igor, whose sister is working in northern Italy. Although his sister resides in the same country as he does, they don’t get to see each other very often. The most difficult problem Igor is facing is that he has not seen his relatives for three years now. His family is unable to visit him due to the necessity of a visa and the overwhelming requirements to get it.

Thousands of Moldovans are forced to leave the country to find work, due to lack of jobs and low earnings. After graduation, many students choose to leave the Republic of Moldova behind and go to work for well paying companies in other countries.

Being described by the international community as the ‘poorest country of Europe’, the Republic of Moldova has the lowest salaries on the continent, which can barely cover the basic daily needs. The salaries vary from tens of dollars to a couple hundred of dollars a month. A nurse would normally earn up to $170 a month if she has previous experience, while a recent graduate in social studies earns $70 a month. The lack of experience of the new alumni negatively hurts their employment chances, because most employers want specialists with at least 2-3 years of previous experience. As a result, the Moldovan universities prepare jobless citizens on a broad scale which have low chance to find a job upon graduation.

The dissolution of the Soviet Union has had a strong impact on the Moldovan economy. Being eager to establish a democracy ruled by its own nation, the new government, which was installed after 1991 wasn’t able to efficiently manage the state’s budget, struggling with deep poverty among the people living in the countryside. Inefficient task and resource management led to the current economic deadlock. The Value Added Tax in Moldova is 20%. The high contribution to the state budget frustrates the Moldovans because they don’t receive much in return.

Ion Cecan, 75, has been retired for several years now and is totally dissatisfied by the government. His monthly allowance does not exceed $70 after working for 40 years as a driver in the Soviet times and thereafter. At his age, he works as a security guard at a parking lot on a night shift. “I can barely pay my bills; I have to turn off the light to save money,” says Cecan who lives in Moldova’s capital, Chisinau. Currently in her 60s, Tamara Popa has waiting in line for four hours at the Romanian Consulate to apply for Romanian citizenship. The Romanian passport offers the possibility to freely travel within the European Union zone.

“I have applied for the Romanian citizenship to be able to travel to Italy to take care of my grandchildren,” explains Popa. This will be Popa’s first trip outside of Moldova.

“My son and daughter live and work abroad. My daughter has been living in Verona, Italy for six years already. She comes home once a year,” says Popa. She states that she has never visited her children because she doesn’t hold a visa or a Romanian passport.

“My daughter’s paycheck in Italy is about 900 Euro ($1,215),” adds the 60 years old woman, who complains that her retirement pension is equal only to 550 Moldovan Lei ($46). “I could barely afford a trip to this city to apply for the Romanian citizenship,” says Tamara Popa.

There are 154,000 Moldovans who live and work legally in Italy, although the Moldovan Embassy in Rome estimates that there are another 50,000 Moldovan citizens living in Italy who are not registered with the local authorities.

Massive numbers of Moldovans apply for Romanian citizenship, which enables them permission to travel and work without visas within the EU. According to the National Authority for Citizenship, directed by the Romanian Ministry of Justice, more than 51,500 requests were made by Moldovan citizens from the beginning of the year until now; over 47,000 were approved from the applications sent during 2010. 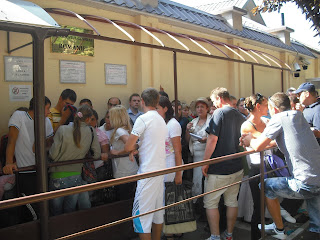 The National Employment Agency in Moldova states in a report that during the past years, there can be observed a regression in the number of inhabitants residing and working in Moldova, especially of those able to work. According to the report, the people who are affected by unemployment include the disabled, the youth and especially those living in the countryside.

According to the National Bureau of Statistics, the unemployment rate for the first two quarters has showed that 7.8% of the people were jobless, compared with 4.77% of their neighbors in Romania, according to the data provided by the Ministry of Labor, Family and Social Protection.
In order to escape the tough economy, many Moldovans are forced to leave their children behind and find a job in other countries. Russia, Italy, Portugal, Spain and Turkey are among the most preferred working environments for the Moldovans.

According to the official data provided by the Ministry of Foreign Affairs and European Integration, more than 332,000 Moldovans reside legally in countries other than Moldova, while the real number, which includes those working illegally, may exceed a half million.

Visit msnbc.com for breaking news, world news, and news about the economy

The Germans 'occupy' Berlin as others do the same 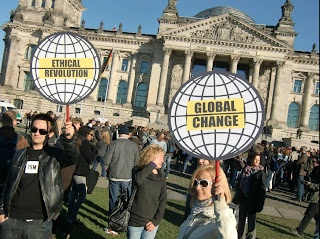 Hundreds of people took to the streets in Frankfurt, Hamburg and Berlin to rally against the “financial evil”. They want “freedom for people, not corporations”. The protesters don’t want further bailout and don’t fully support the government’s actions. In Frankfurt the people gathered in front on the European Central Bank.

According to berlin-gegen-krieg.de, the Germans demand the closure of banks’ dictatorship and of the multinational corporations. They also rally against war and racism.

"We're lacking democracy in this country. There are structures to keep us isolated from one another; they make us compete instead of cooperate," Christian Wollghast says. 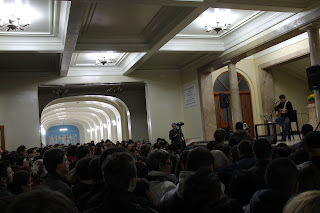